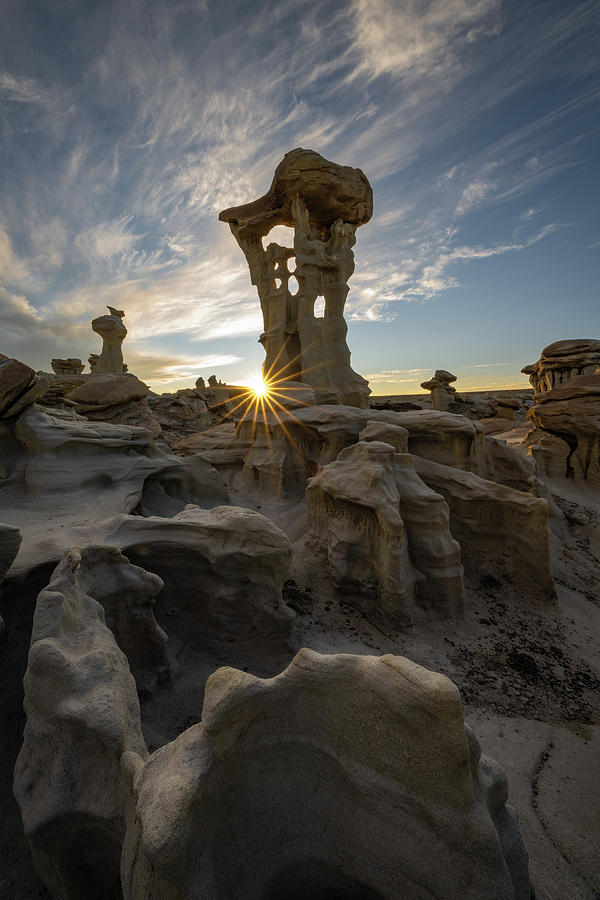 Alien Throne Sunburst in color. Are you interested in seeing an alien world without leaving the country? Plan a trip to north west New Mexico to visit Ah-She-Sle-Pah Wilderness, Bisti Badlands or the De-Na-Zin Wilderness. You will be rewarded with a rolling landscape of badlands which offers some of the most unusual scenery found in the Four Corners Region. This is definitely an otherworldly experience - like an alien culture frozen in time.

Compare this version with my black and version of the same image. Which depiction of the Alien Throne most grabs your attention?

Time and natural elements have etched a fantasy world of strange rock formations made of interbedded sandstone, shale, mudstone, coal, and silt. The weathering of the sandstone forms hoodoos - weathered rock in the form of pinnacles, spires, cap rocks, and other unusual forms. Fossils occur in this sedimentary landform. Remains of ancient forests are hinted at in the petrified logs scattered across the wilderness. Translated from the Navajo language, Bisti (Bis-tie) means "a large area of shale hills." De-Na-Zin (Deh-nah-zin) takes its name from the Navajo words for "cranes." Ah-She-Sle-Pah translated is "gray salt".

To access the various desert wilderness areas, you must be willing to drive on several miles of dirt/gravel roads. There are no marked trails in the Wilderness areas so you will need a GPS based navigation device. Cell phone service is spotty and should not be counted on for navigation in the wilderness.

Thank you for the kind words Michael. It was an amazing experience.